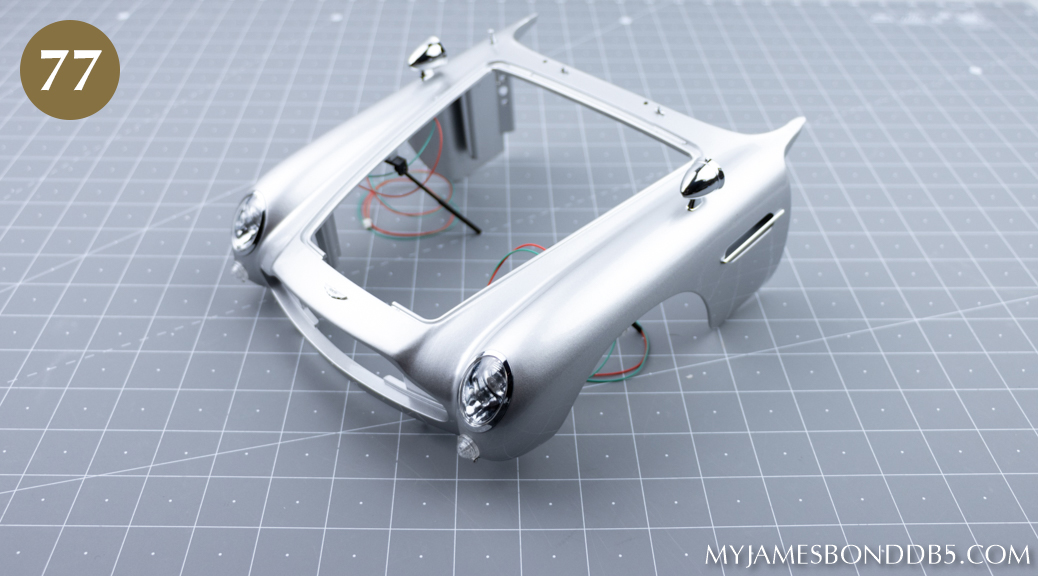 “You have now collected enough components to start assembling the front of the car in earnest. This [pack] you will fit the headlights, wing mirrors, aerial and Aston Martin badge.”

Compared to most of the other packs of this build, we will be doing a bunch of work in this one!

This pack comes with two bags of unlabeled screws containing the following type(s):

Before we start this pack, I want to take a look at this Car Front Body. It is a huge chunk of pre-painted metal with the chromed windscreen washers already added. It arrived in its own box within the shipment and was very well protected: 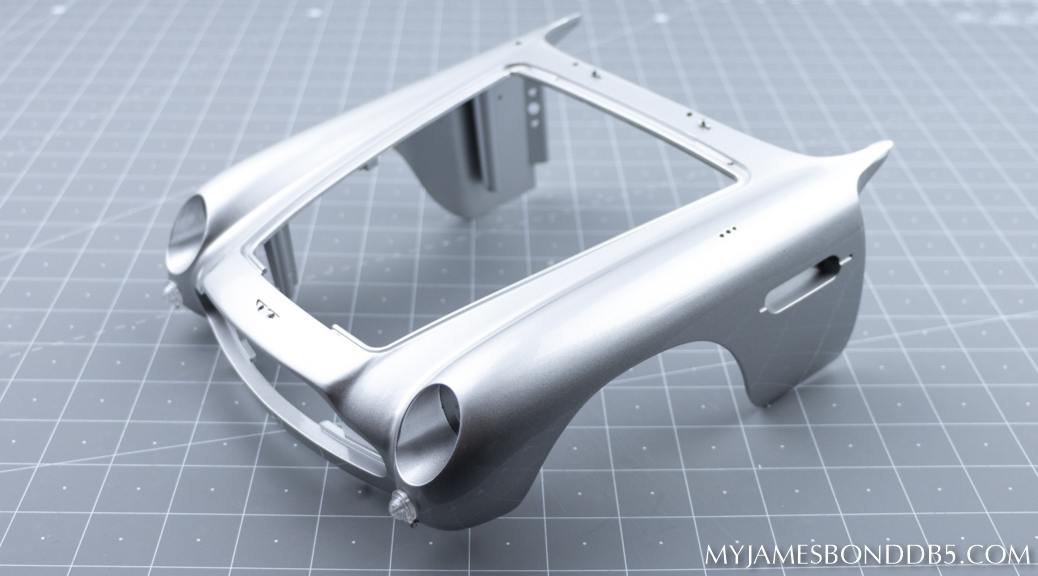 One thing to mention is that the front turn signal lenses are pre-installed with the machine guns behind them. They can be carefully folded down which will extend the weapon behind them. The tiny hinges on these appear to be VERY fragile; I recommend using caution when operating them: 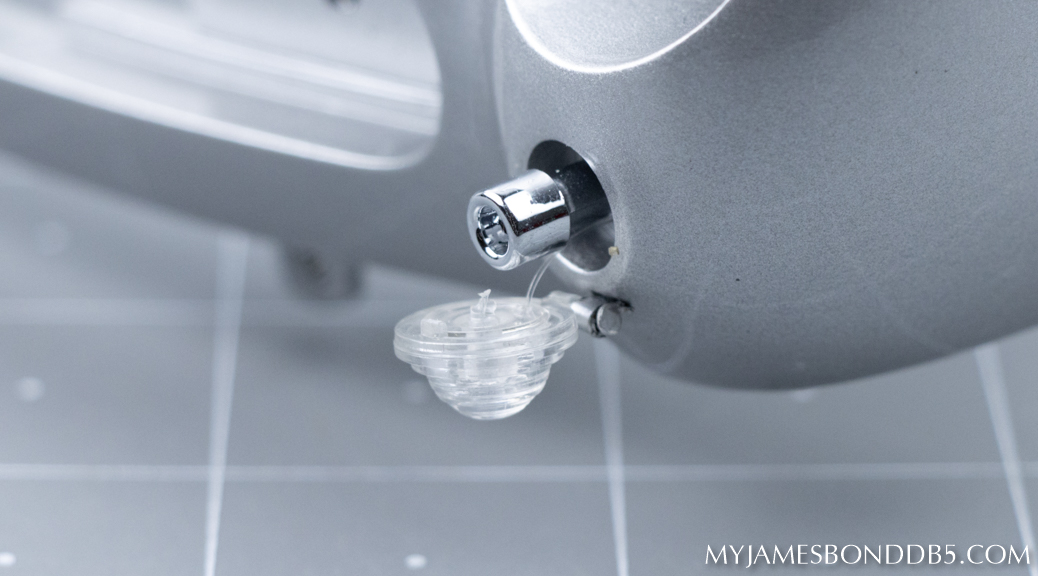 If you look very closely at the picture above, you can see a tiny filament (like fishing line/fiber optic) attached to the lens cover. This runs along the machine gun barrel and is glued to the back of the it under a clear plastic disc. Then, an extension of the filament is left hanging free (see below). While not mentioned anywhere that I can find, I think this extra filament is used to retract the guns and close the lens. Once the car is completed, you should be able to use your finger to feel inside the front wheel wells for these filaments and gently tug on the filament to retract the guns: 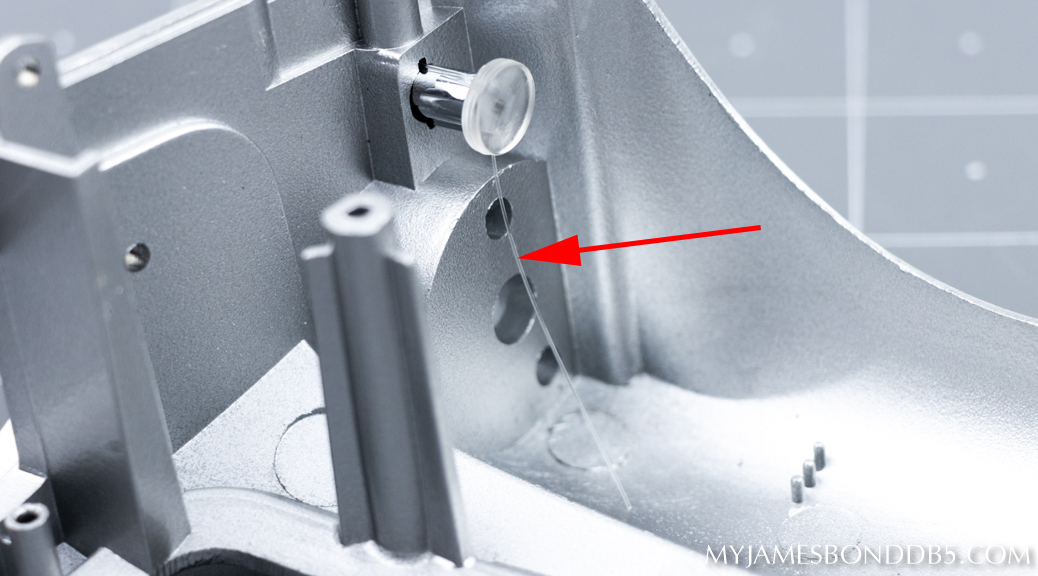 OK, with that out of the way, we need to collect the parts we will need for this pack: 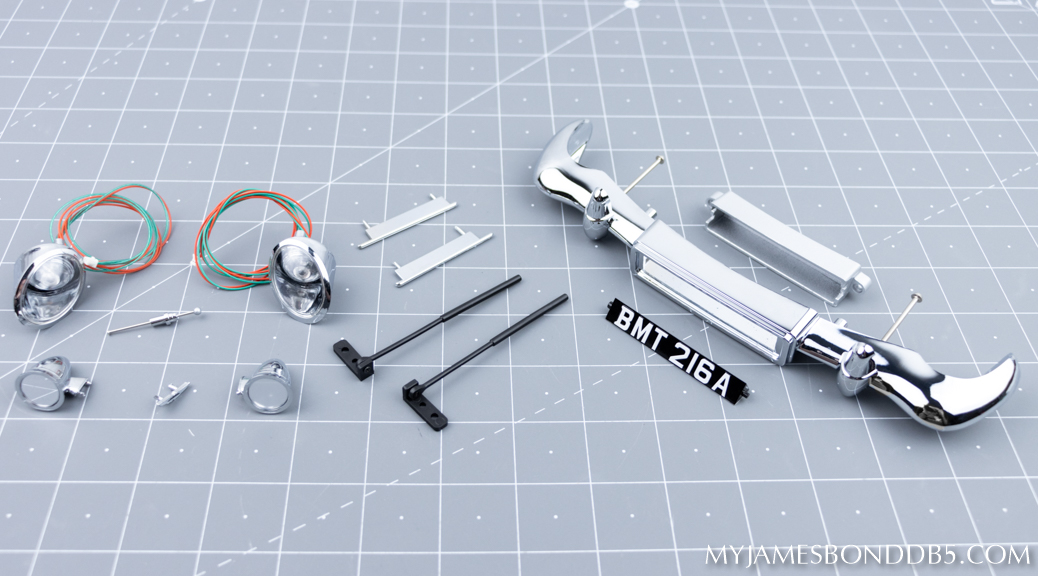 Slide the pegs on the ends of the Rotating License Plate down into these matching notches behind the Front Bumper. Make sure the plate is right side up, as shown: 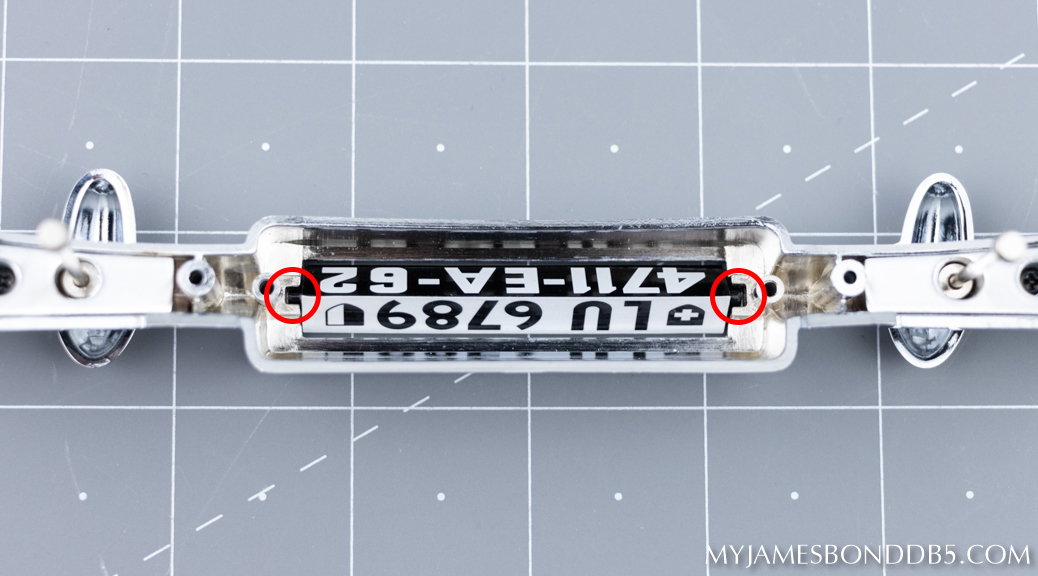 This only fits flush in one orientation. If it does not match the curves of the bumper, turn it over: 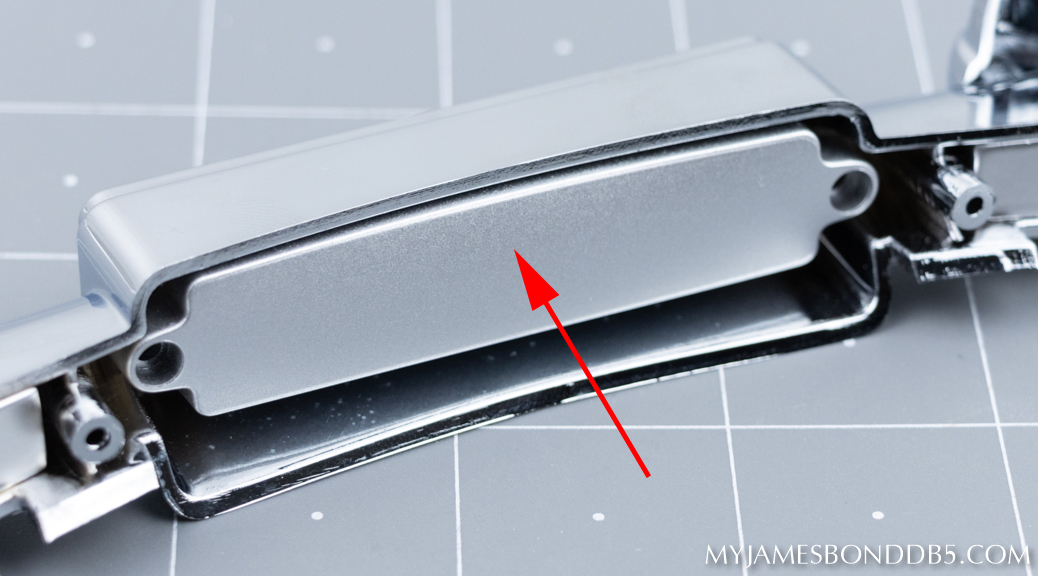 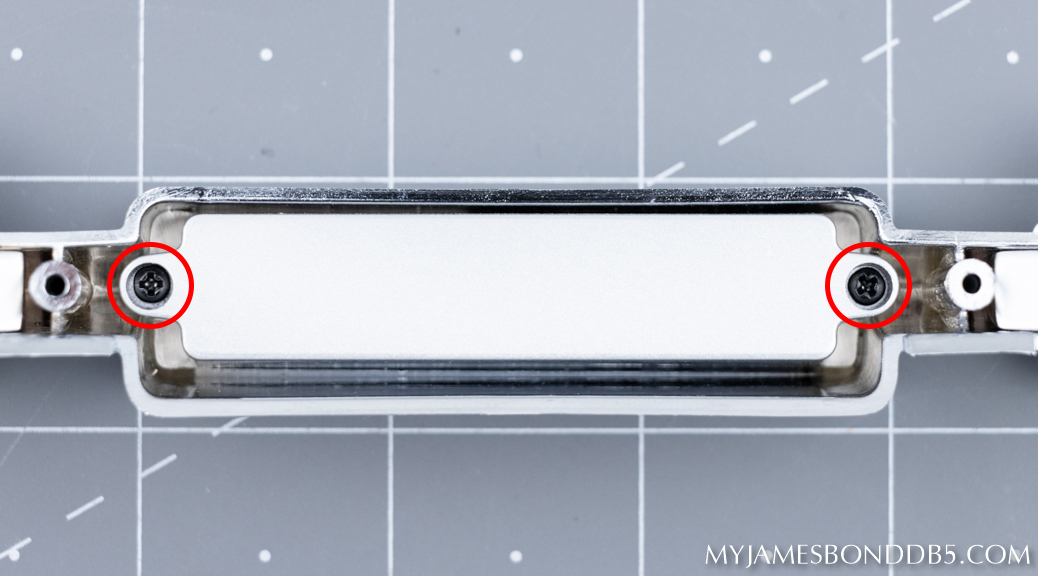 This is what our Front Bumper looks like now. You should be able to easily rotate the plate as desired: 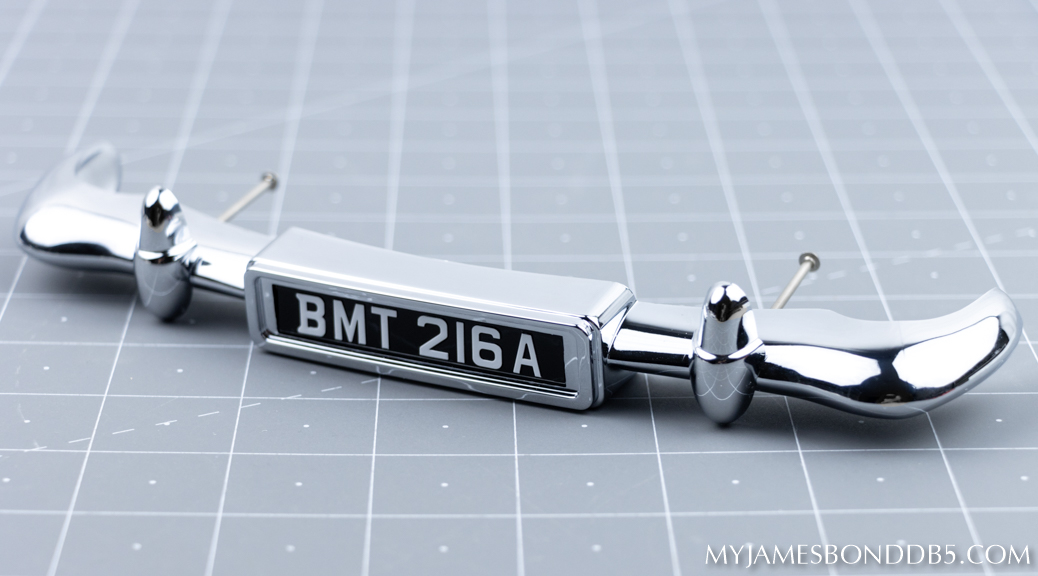 Retrieve the two Hood Support Rod assemblies from the previous pack. Fit the mounts to these locations on the underside of the Car Front Body, aligning the locating hole over the matching pin, as shown.

The rods and mounts are identical, so it doesn’t matter which side goes where as long as the the rods face towards the rear of the car, like shown below. I had to retake this photo later in the build (this is why the hood is already installed): 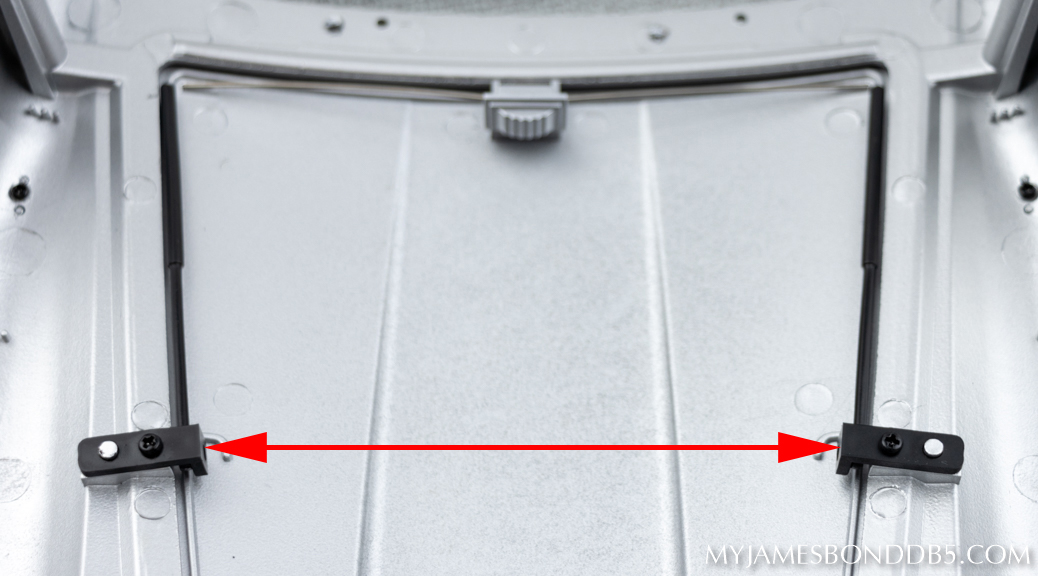 Secure the Hood Support Rod Mounts to the Car Front Body with two (2) Type C screws, one on each side.

This is your friendly reminder to try using 3-in-One Oil on all screws going into metal: 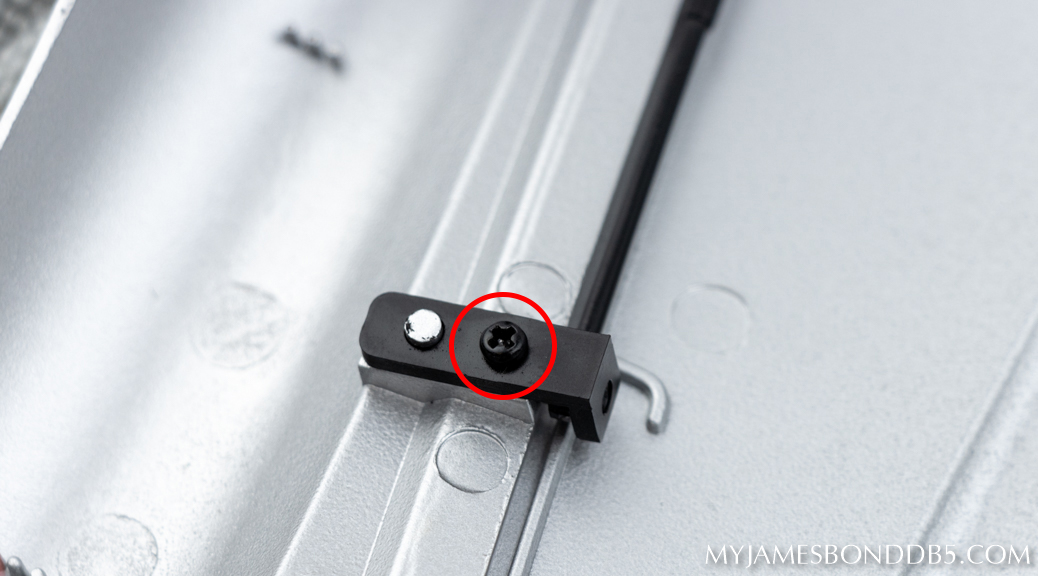 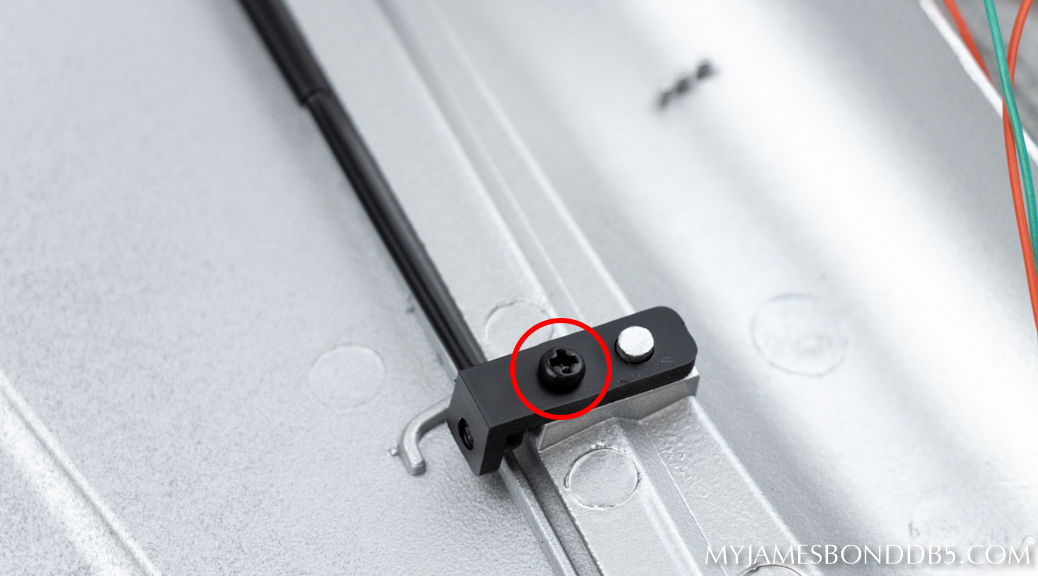 Press the two pins of each Side Rail into these matching recesses on either side of the Car Front Body.

These Side Rails are not identical. One side of them will have the plastic mold release marks and this should be facing down. Keep this in mind as you match the long and short ends to the grooves of the body, as shown: 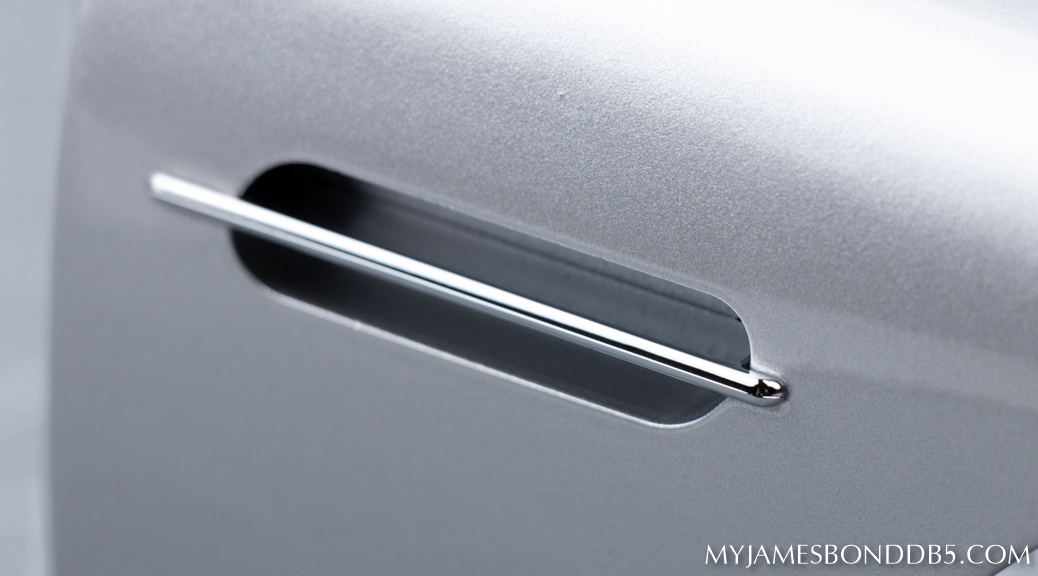 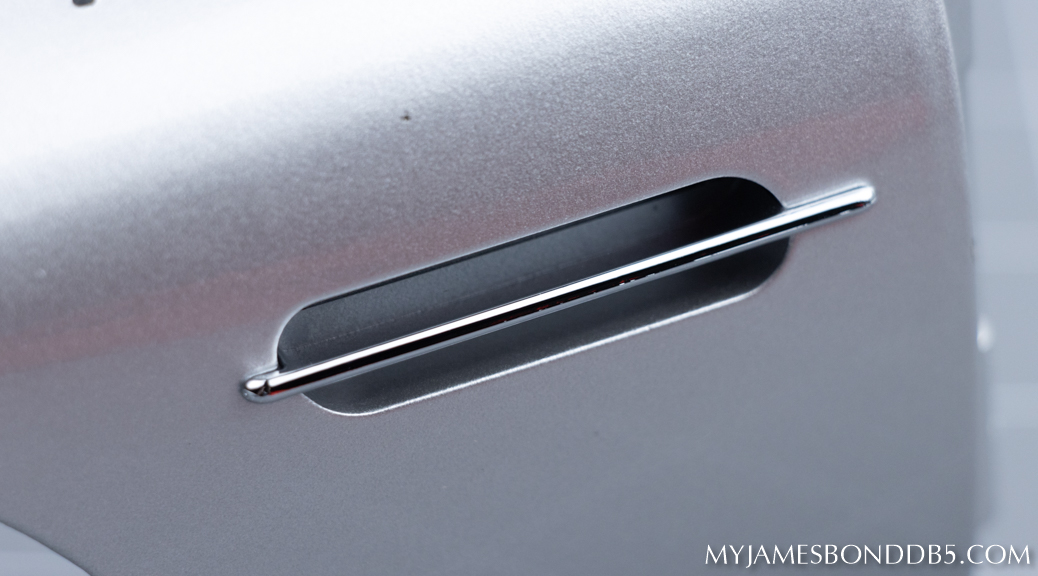 The two Wing Mirrors are NOT the same, nor are they marked in any way. However, if you look closely at the curvature of the mounting surface of each, they are opposite each other. These will only sit flush to the car if they are used on the correct side. If it doesn’t look right, switch sides:

Grab the mirror pictured on the right above (for the LEFT side of the car) and fit its two locating pins to the matching set of holes in the left wing of the Car Front Body, as shown. 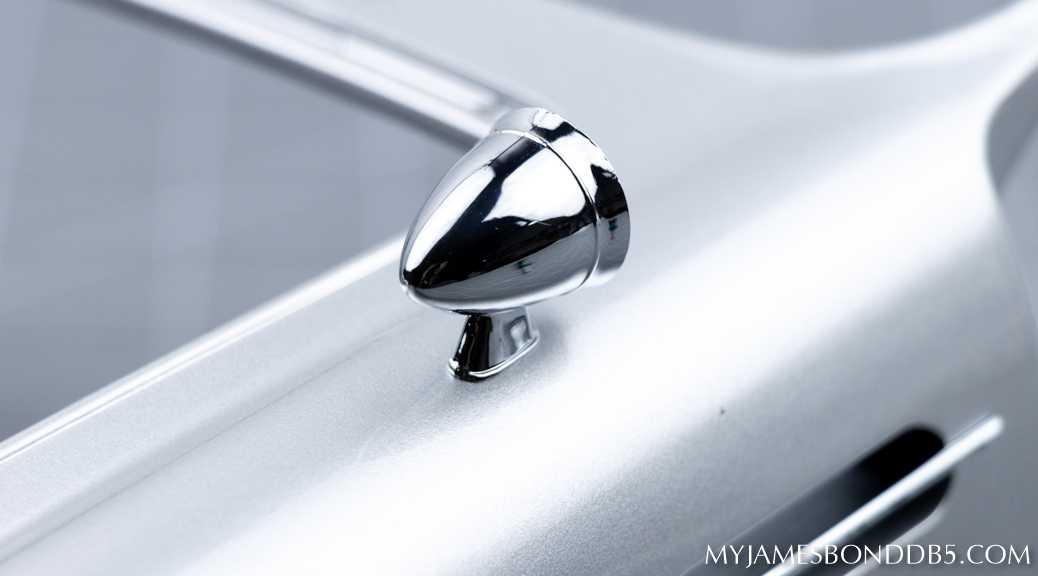 Secure this Left Wing Mirror into place from underneath with one (1) Type P screw: 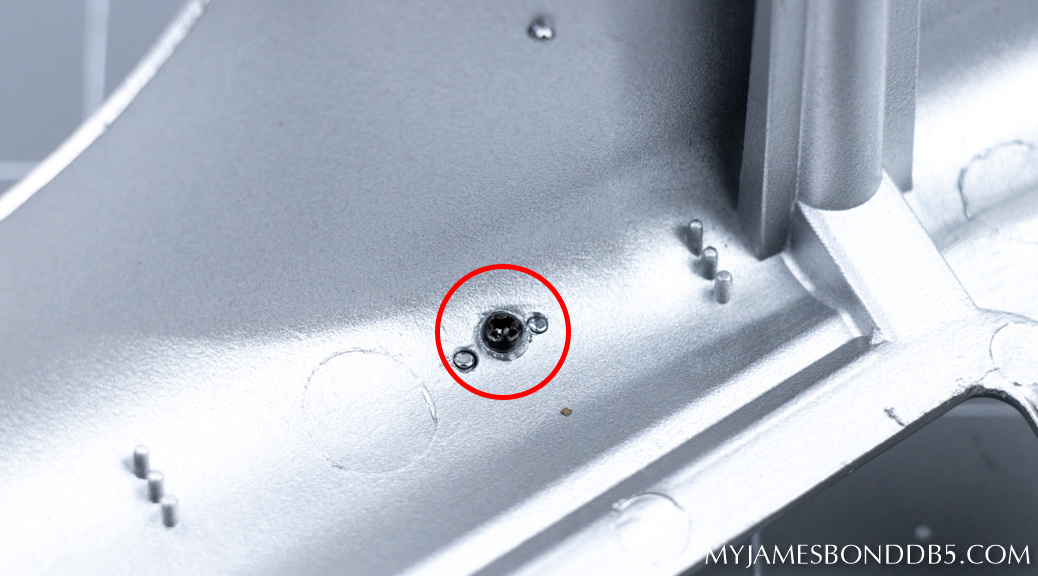 Fit the two locating pins of the remaining Right Wing Mirror to the matching set of holes in the right wing of the Car Front Body, as shown: 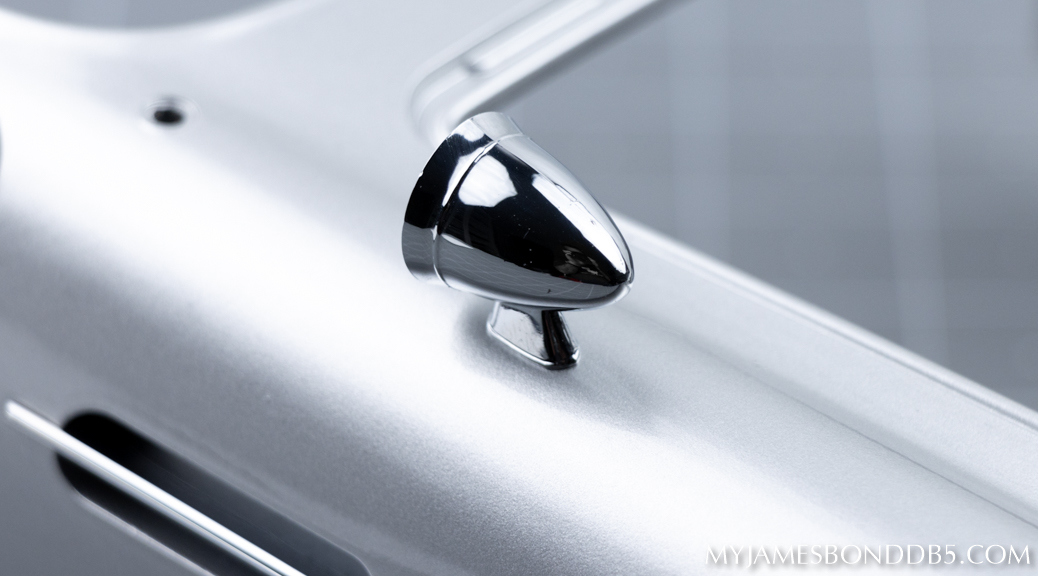 Secure this Right Wing Mirror into place from underneath with one (1) Type P screw: 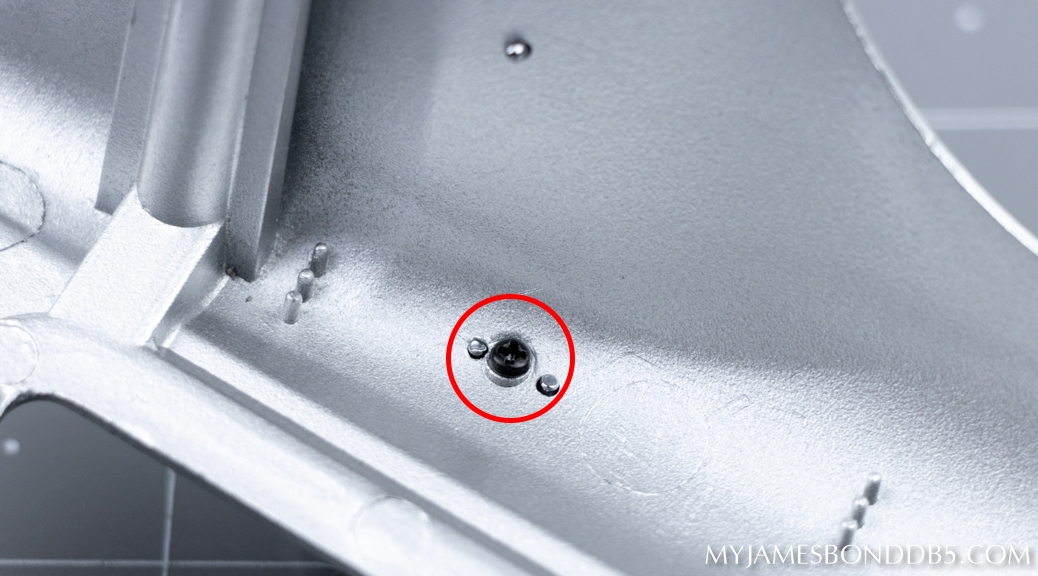 The two Headlights assemblies are marked (‘L’ for Left and ‘R’ for Right): 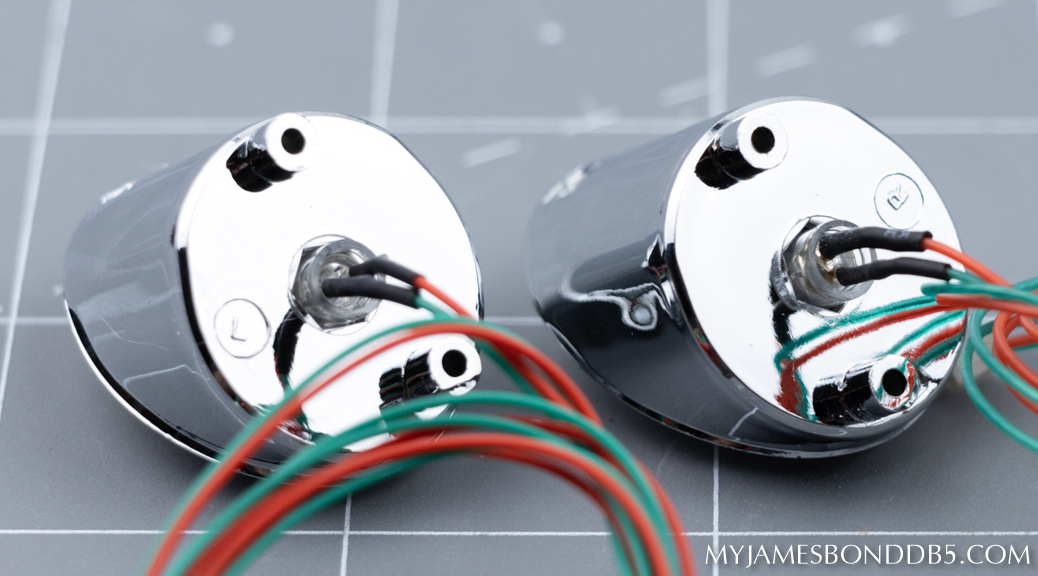 Feed the plugs of each headlight assembly through the appropriate center holes at the rear of the headlight recesses of the Car Front Body, as shown: 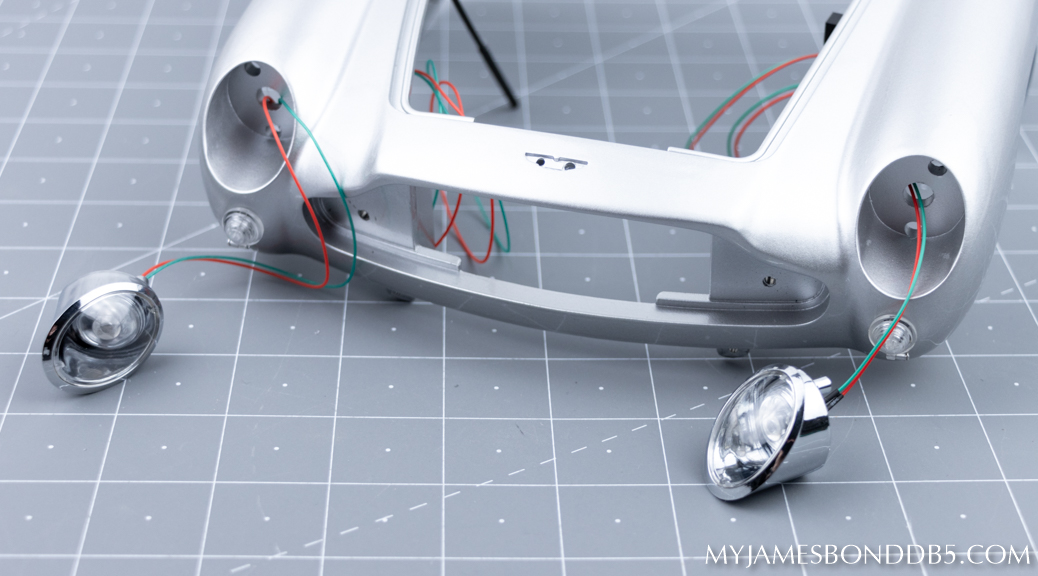 While pulling the wires through, carefully press each headlight assembly flush with the body:

Starting on the left side, you may need to hold this Left Headlight tightly in place so… 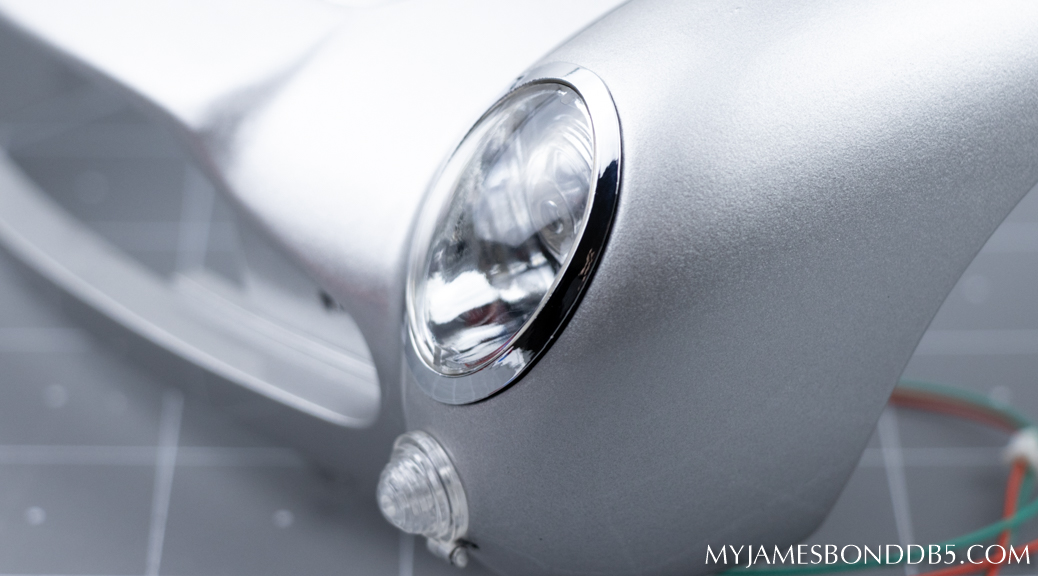 … you can secure it to the Car Front Body from behind with two (2) Type U silver screws.

These screws are not very easy to install as the angle is funky. Just take your time: 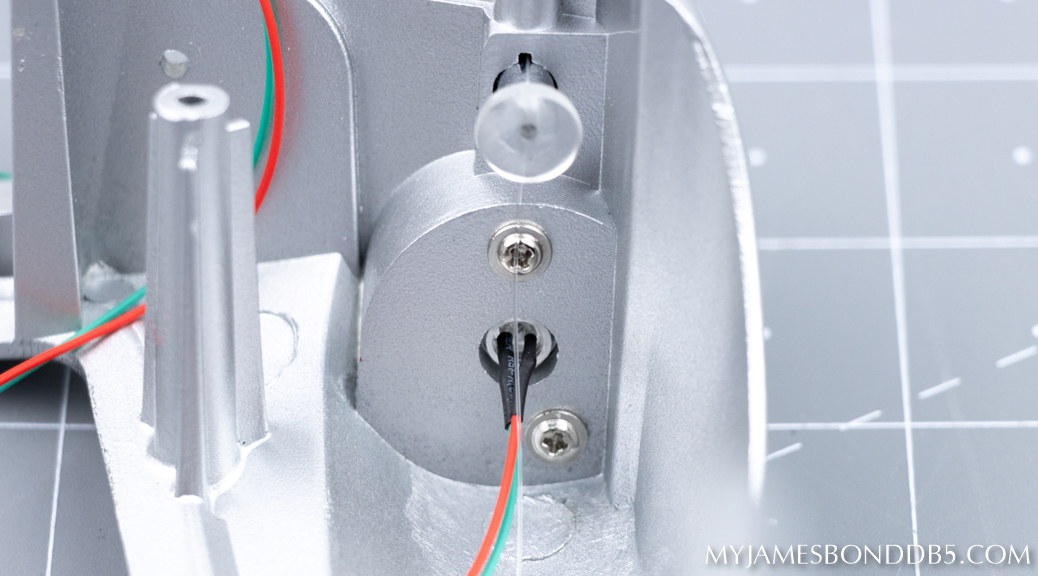 Same on the other side, hold this Right Headlight tightly in place… 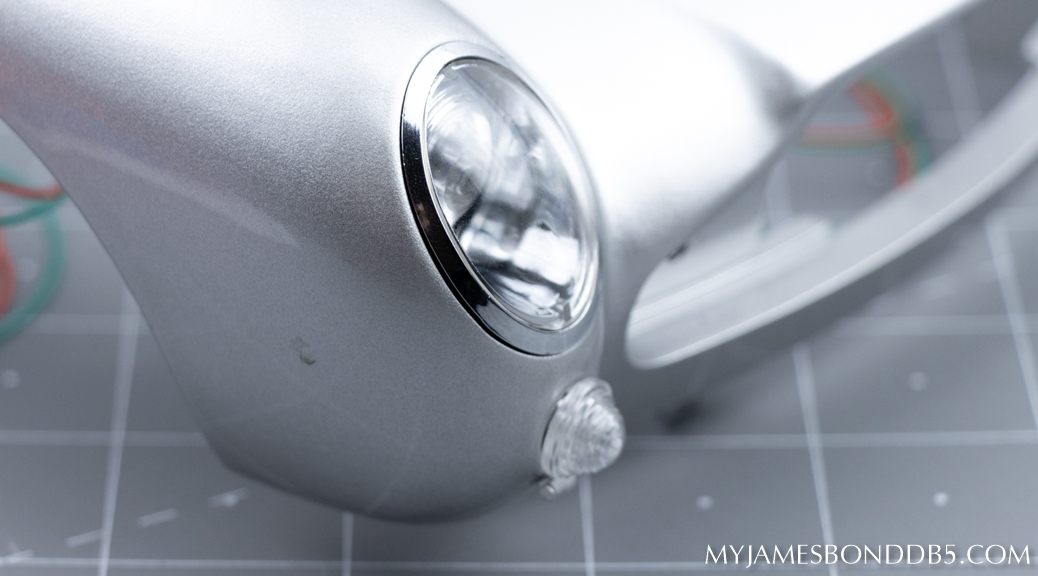 … while you secure it from behind with two (2) Type U silver screws: 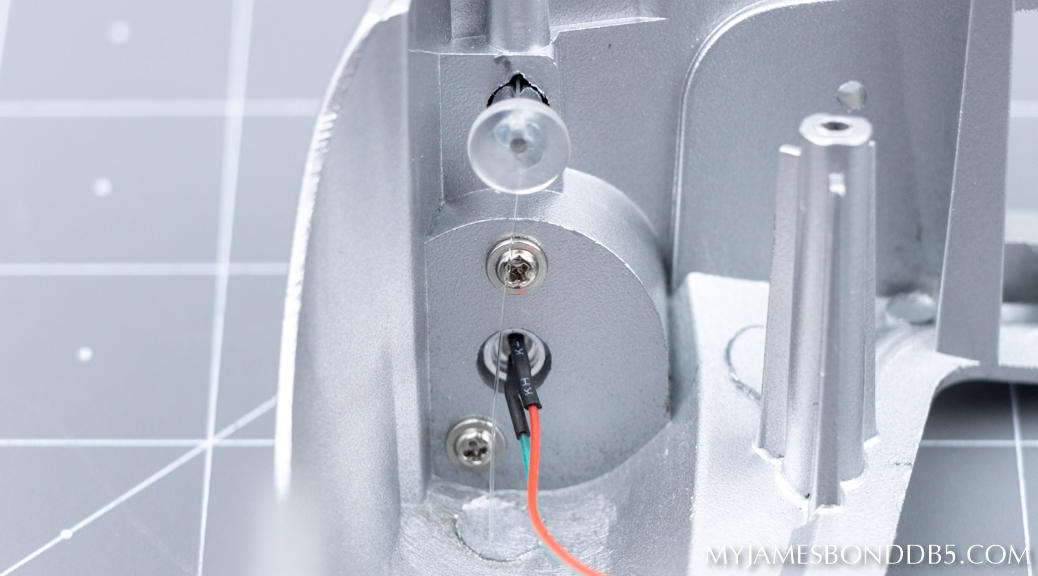 Press the two pins of the Aston Martin Logo into place at the front center of the Car Front Body, as shown.

There is a tiny piece of adhesive tape down inside the logo-shaped recess on the Car Front Body that should have held this in place. Unfortunately, the shape of the metal recess does not quite match the logo and the logo will not sit flush without some serious modifications that would damage the logo/body. Therefore, I had to use some super glue on the two pegs and be OK with it sitting up a bit: 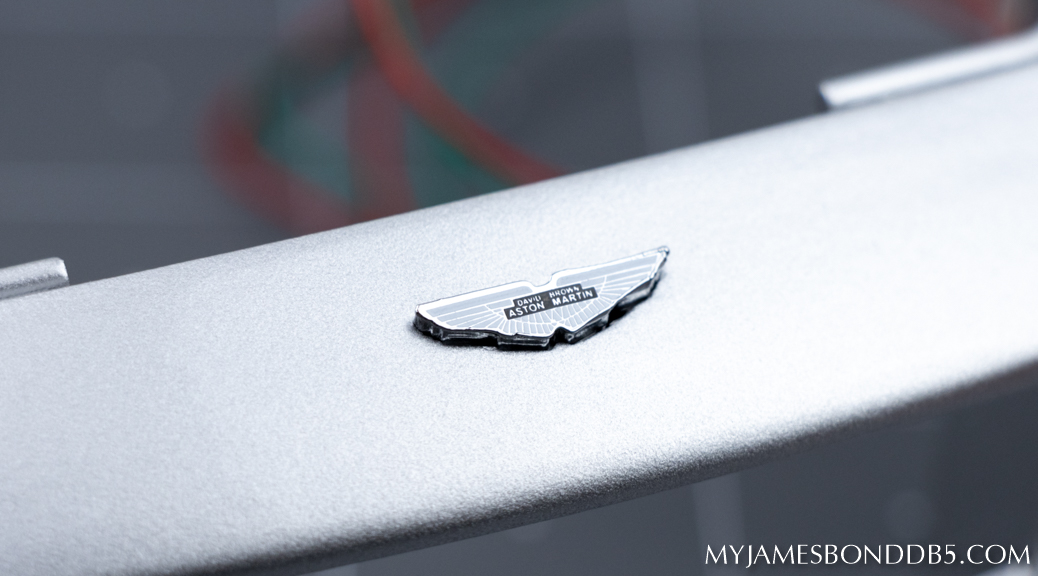 Finally, slide the Antenna down into this hole of the Car Front Body until it clicks into place, as shown: 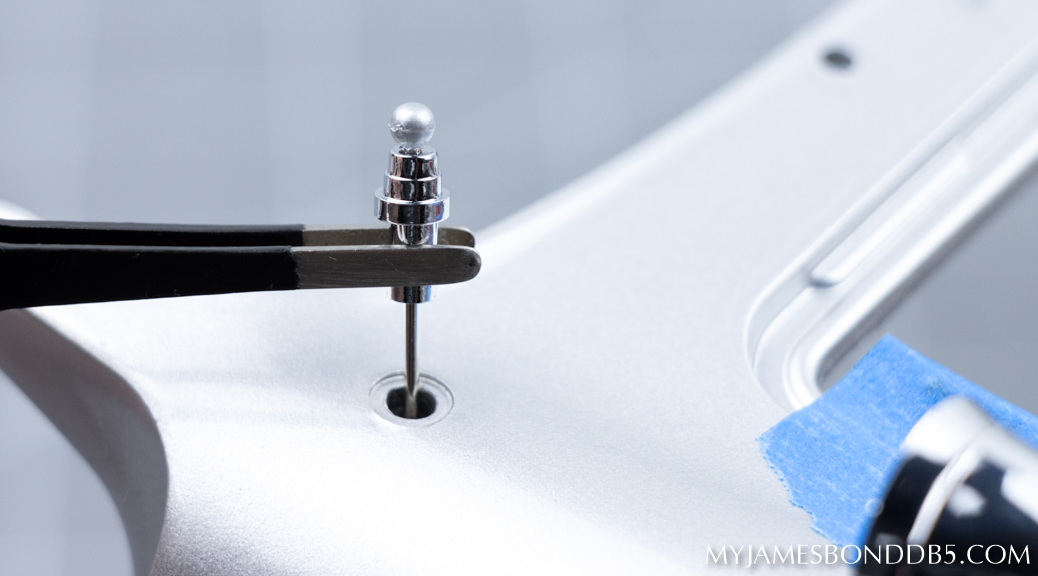 Once this pops into place, you can raise and lower the Antenna mast as desired: 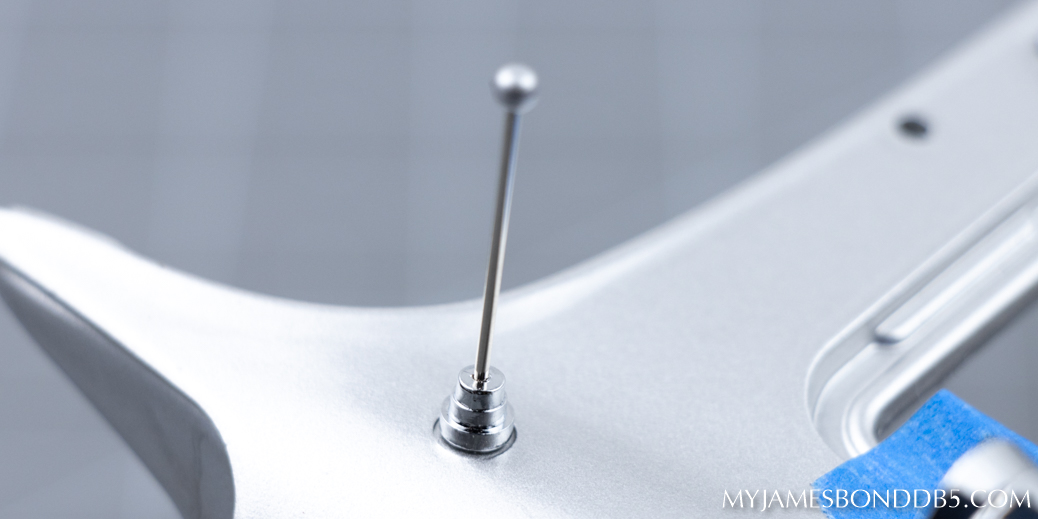 That was an awesome pack to build! So many parts came together to start creating the front end of our DB5. We even went back to some of the very first parts we ever received to finally install them here. The next pack will bring even more stored parts together and let us finish our front end, let’s get on to it!