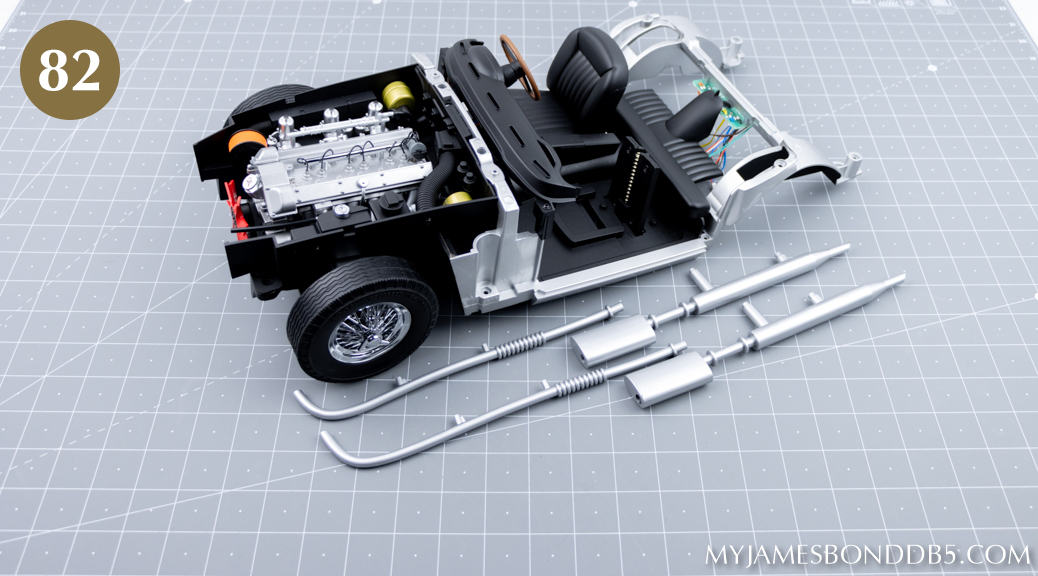 “Start by partially assembling the exhaust pipes, then carry on adding pieces to the main frame of the car. You can then fit the engine, the bulkhead and the main PCB.”

This is going to be another nice, big issue where we add a lot of pieces to our DB5.

Materials: Everything supplied in this pack is plastic.

This pack comes with three bags of unlabeled screws containing the following type(s): 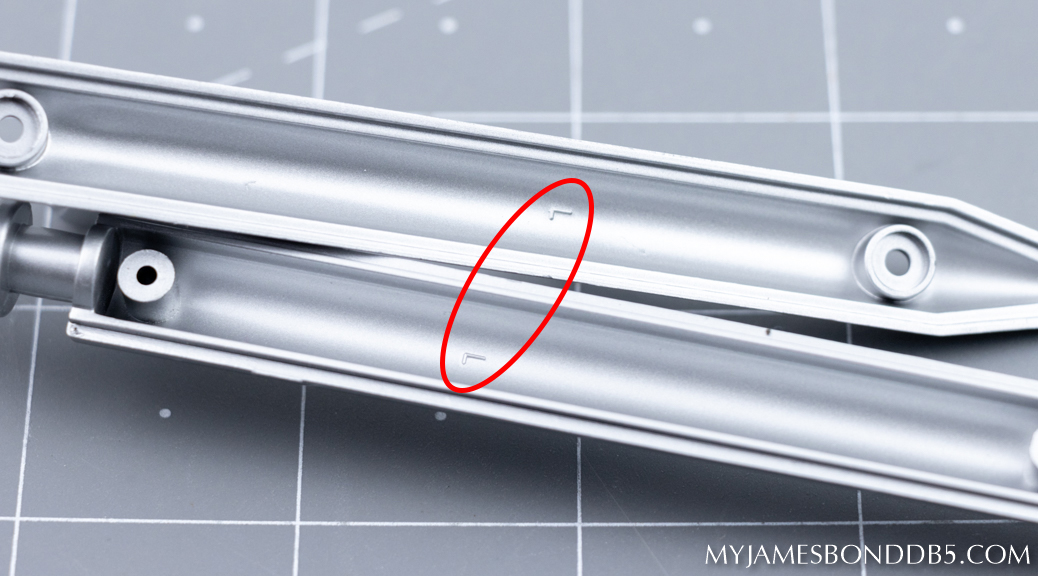 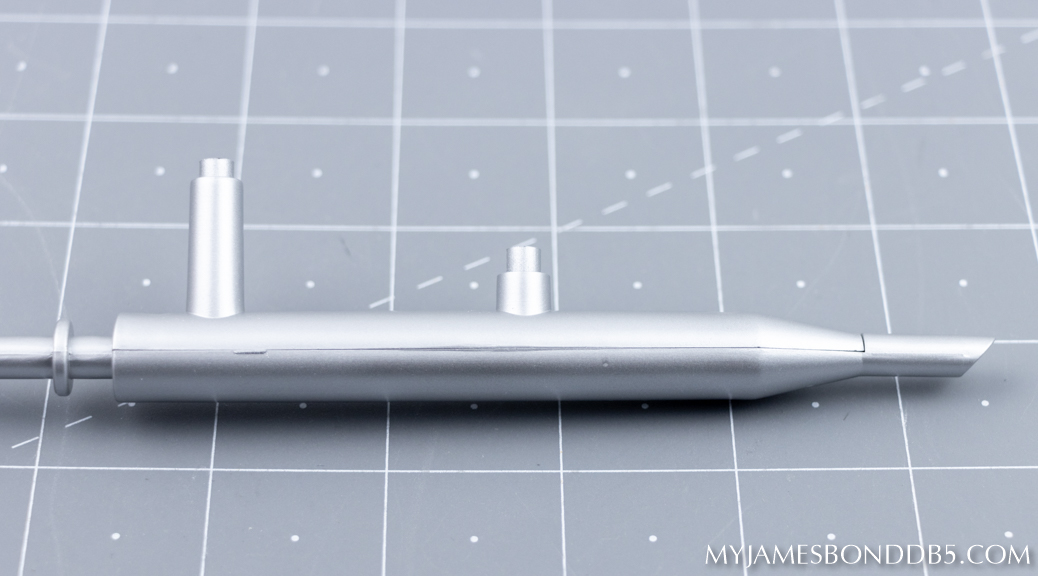 Secure these parts together with two (2) Type L black screws: 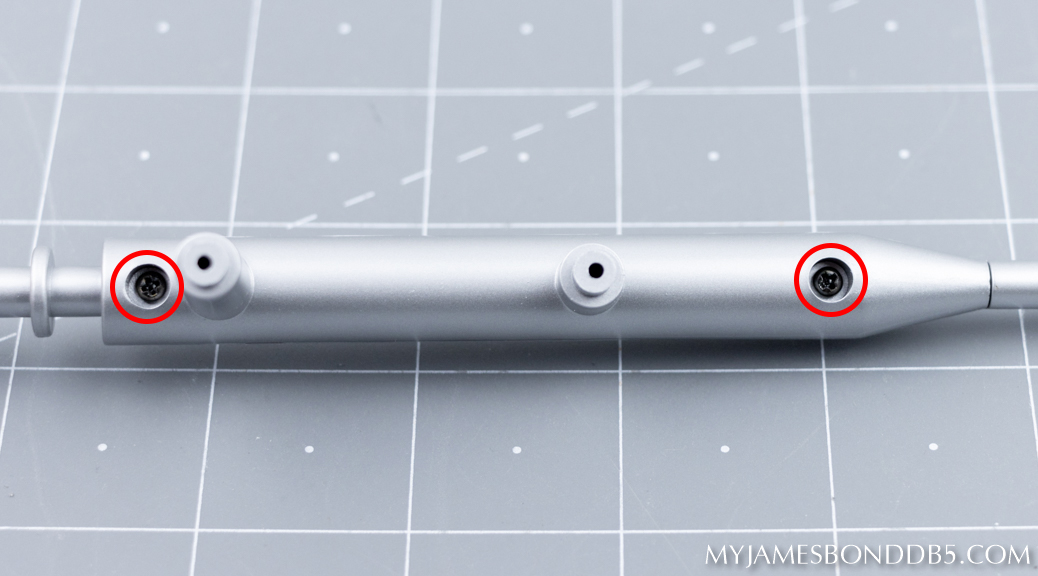 Note the difference in the distance between the mounting posts on the left and right exhausts: 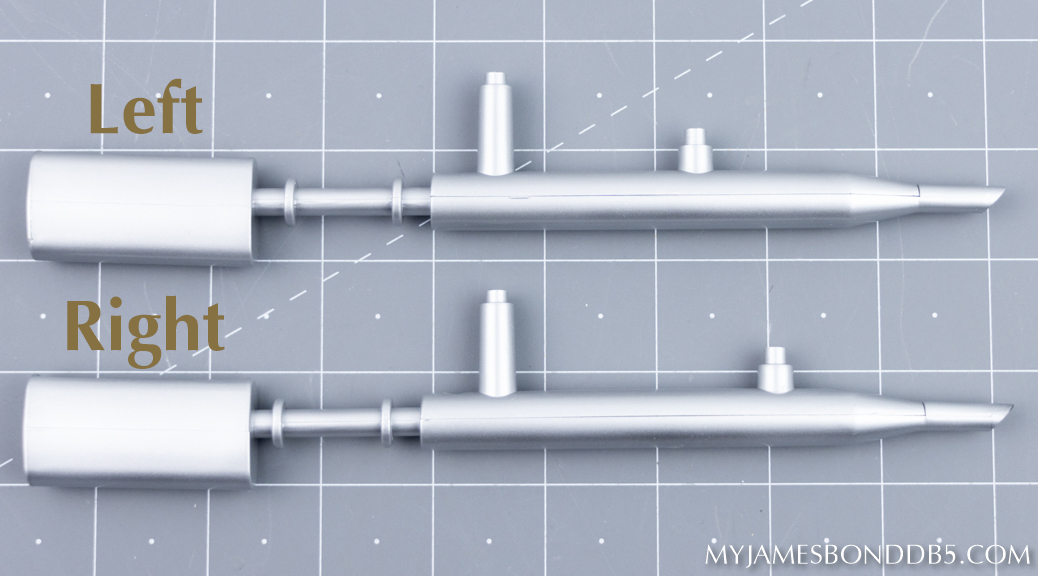 The Engine and Interior

We are going to need the following previously built parts to complete this pack: 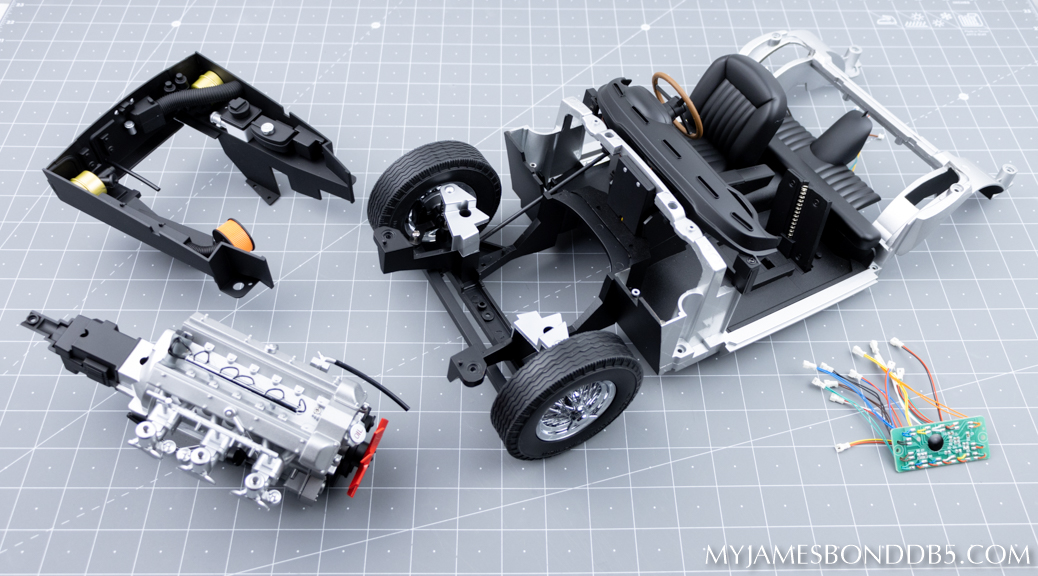 I tried Eaglemoss’ way of installing the Bulkhead assembly (as three separate pieces), but I found it easier to just install it as one complete piece: 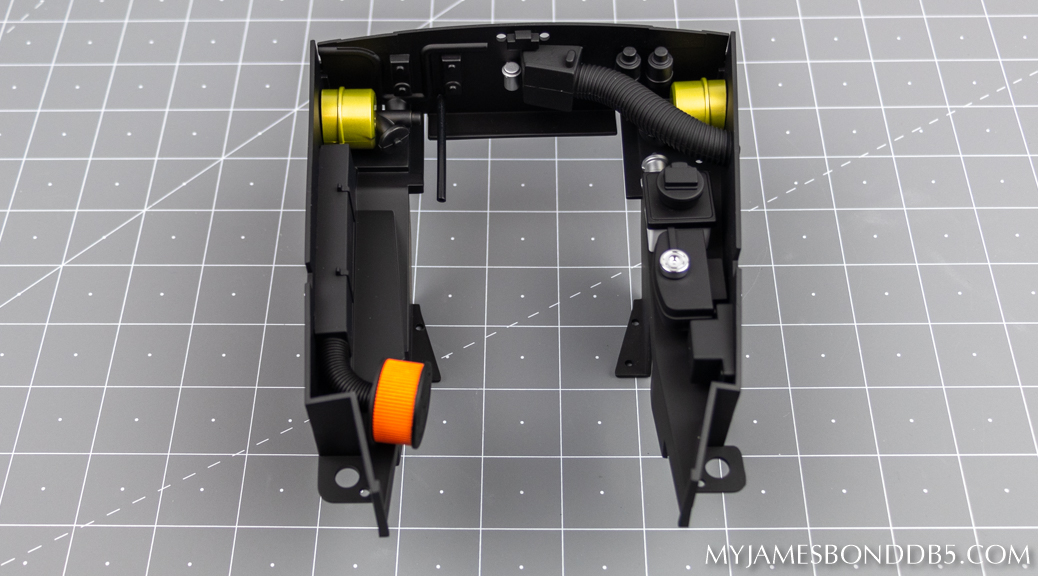 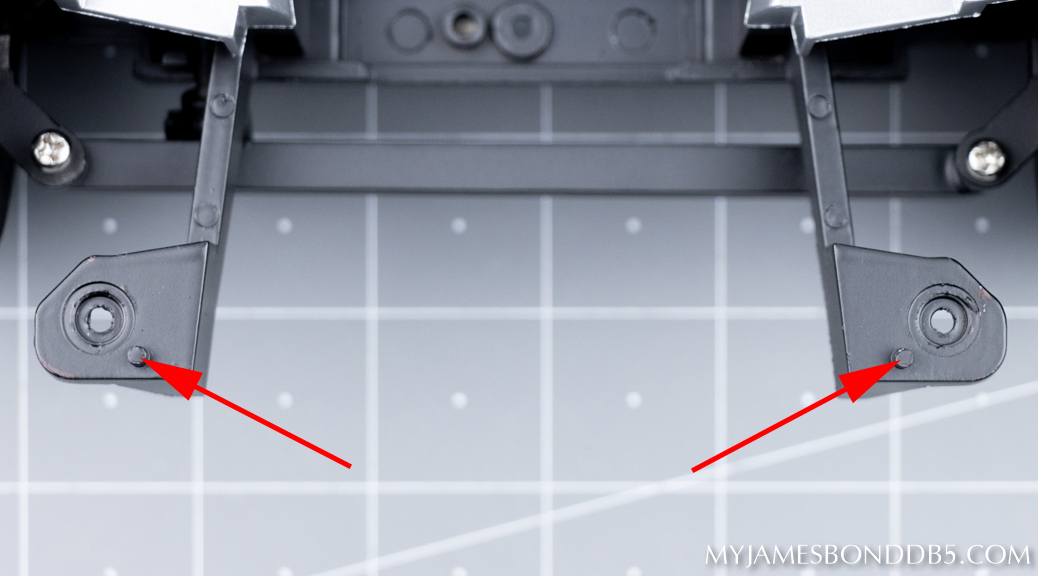 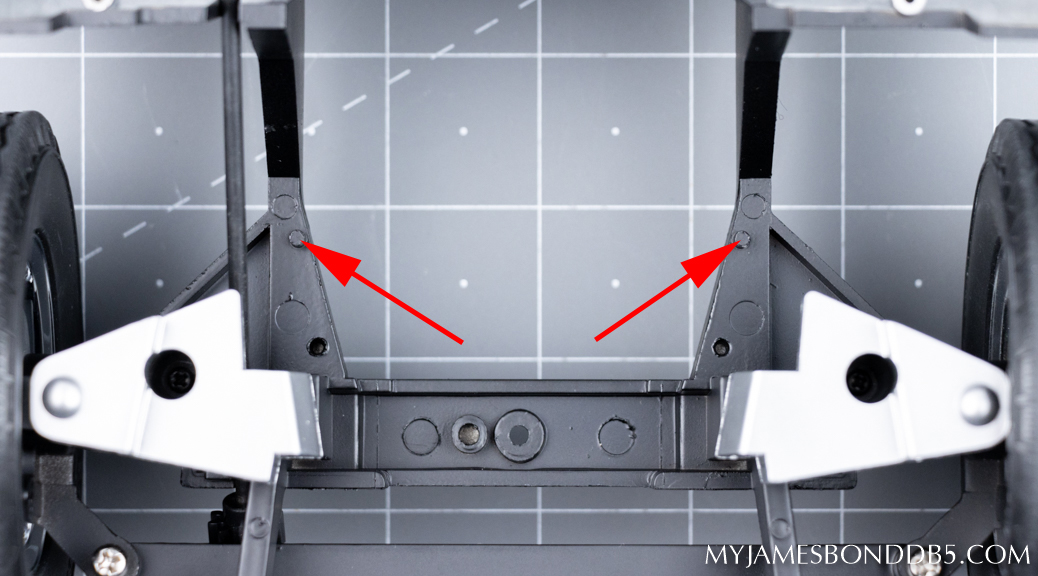 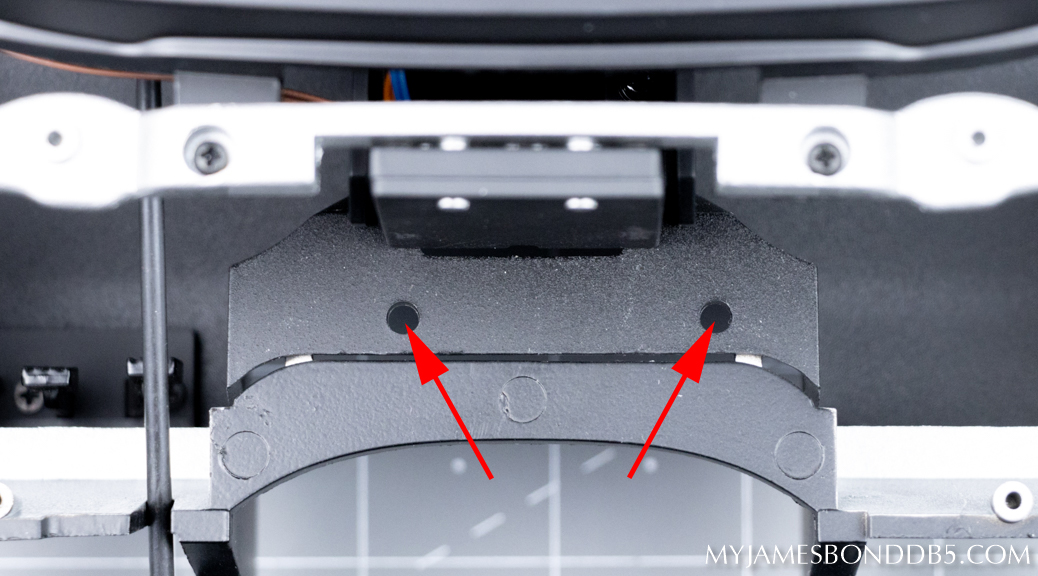 Carefully slide the Bulkhead assembly down into the engine bay of the Main Body Frame, matching the pins and holes. You will likely have to squeeze it here and there to get it to sit down correctly. Here, you can see the front alignment holes sitting onto the locating pins: 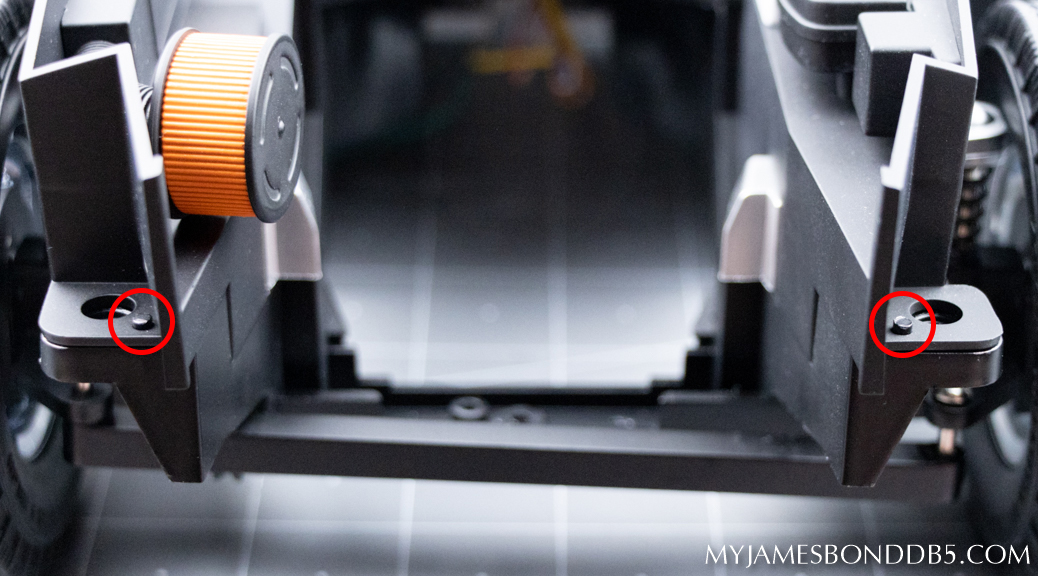 And, these are the middle alignment holes sitting onto the matching locating pins: 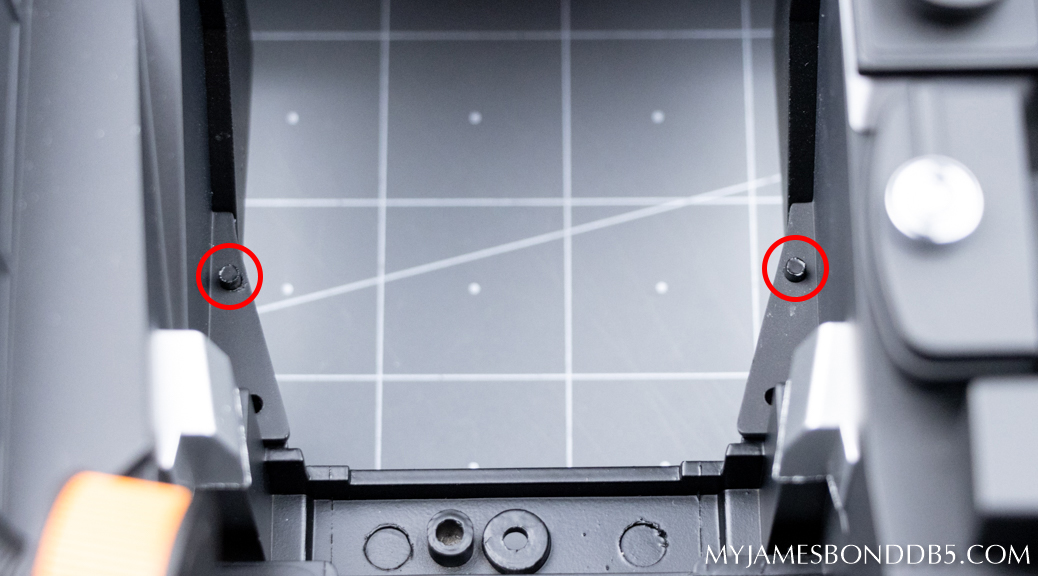 The rear locating pins fit down into the matching alignment holes at the rear of the engine bay. They are not visible here, but I have circled where they are if you could see them: 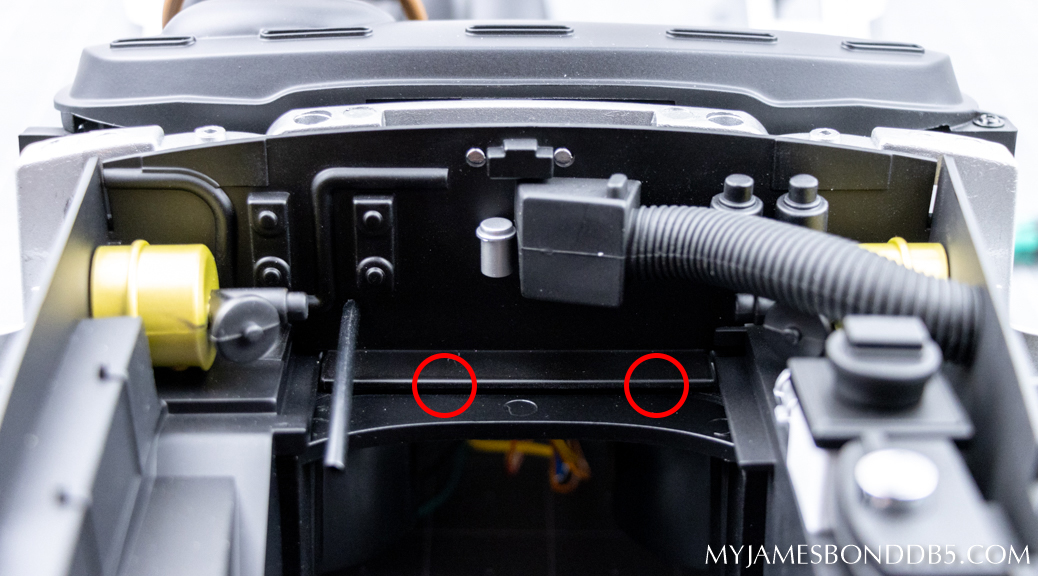 Finally, I think these two pegs of the Main Body Frame (that the Speaker is mounted on) are supposed to fit through these two holes in the rear Bulkhead. However, no matter how hard I pressed down on the Bulkhead, these would not line up. I ended up leaving them as-is, and it should not have any effect on the rest of the build: 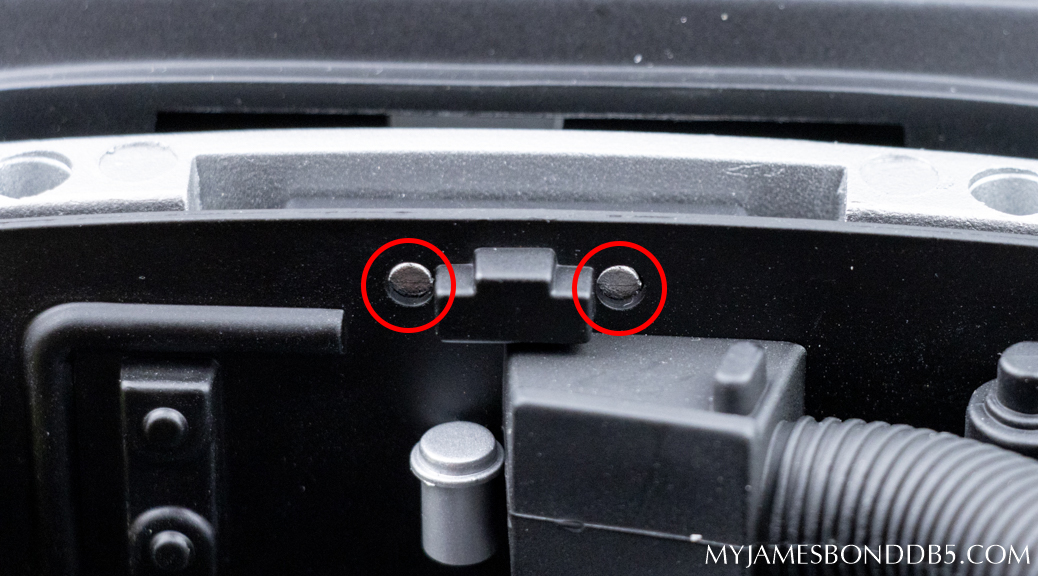 Secure the middle of the Bulkhead assembly to the Main Body Frame with two (2) Type C screws. This is also your friendly reminder to try using 3-in-One Oil on all screws going into metal: 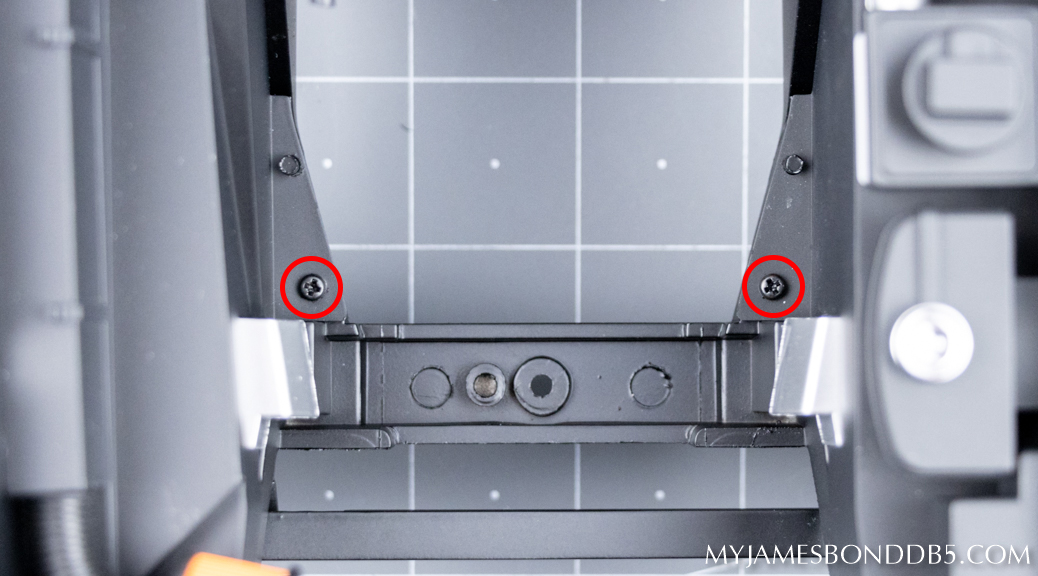 Secure the sides of the Bulkhead assembly to the Main Body Frame with two (2) more Type C screws, as shown: 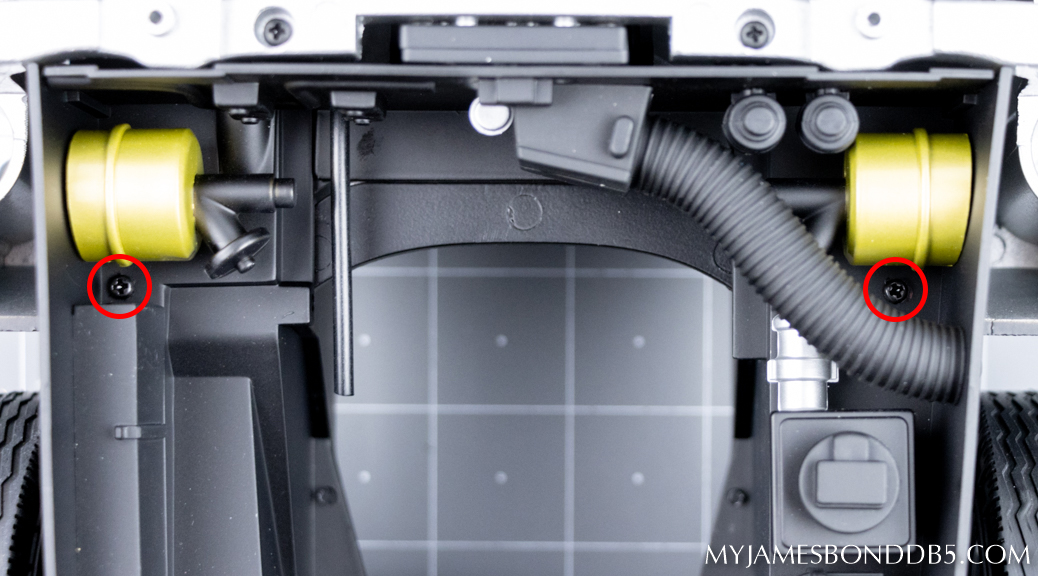 Since the instructions barely cover the wiring, I want to take a moment to secure our current wiring into place before we attach the Engine assembly.

Turn your Main Body Frame over and route the pedal switch wiring towards the center of the car. If you missed it in the previous pack, I had installed a piece of black electrical tape to insulate this wiring from the metal firewall. Here, I lifted the tape to move the wires, then re-taped it down: 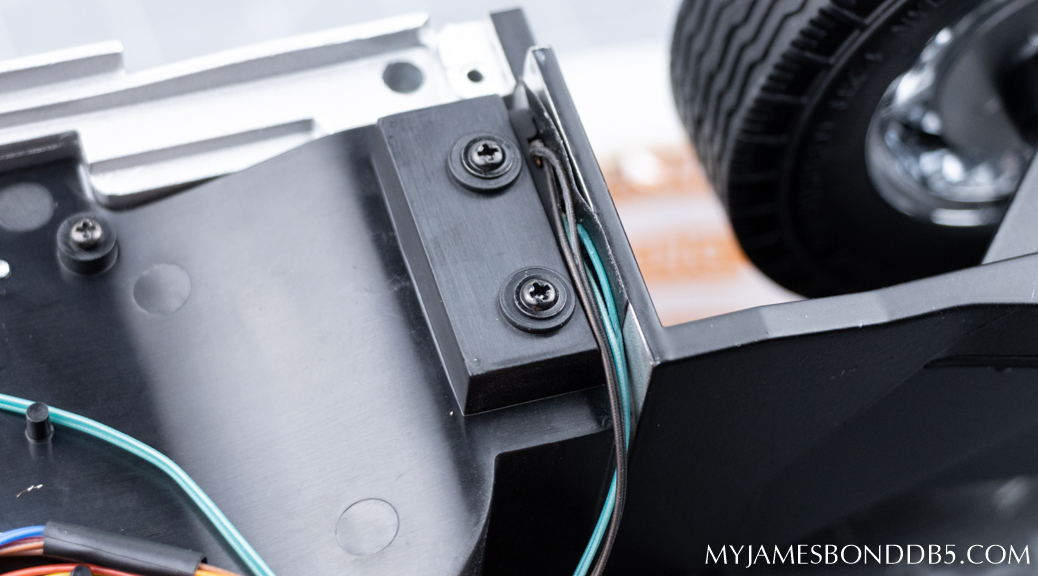 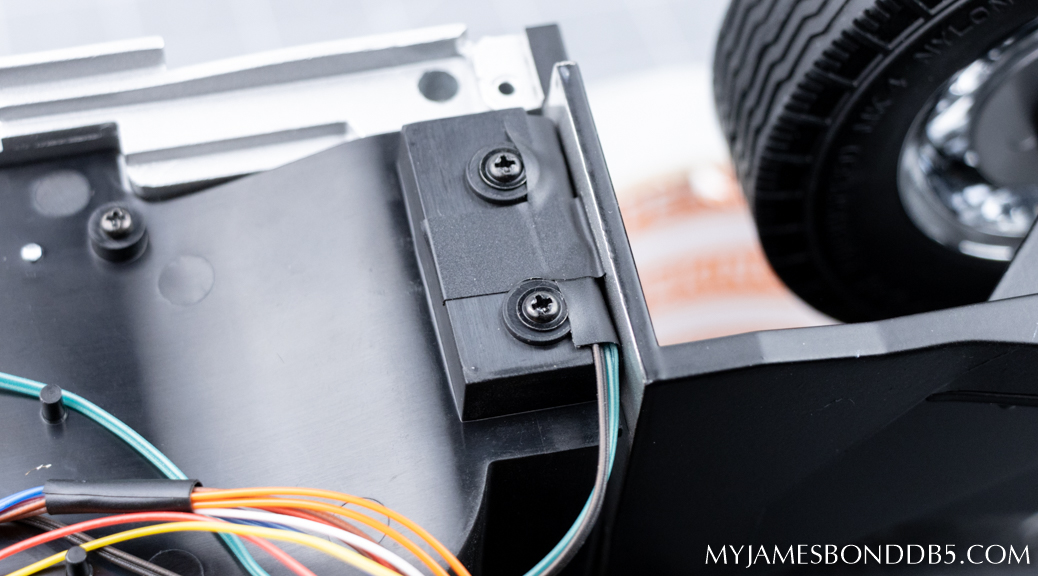 Next, I took all of the wires coming through the center console and electrical taped them against the side of the Floor Panel (arrow in the image below). I also ran the wires under the metal crossbar (circled here). The white plugs will slide under the crossbar much easier if you press down a little on the Floor Panel to make the gap wider: 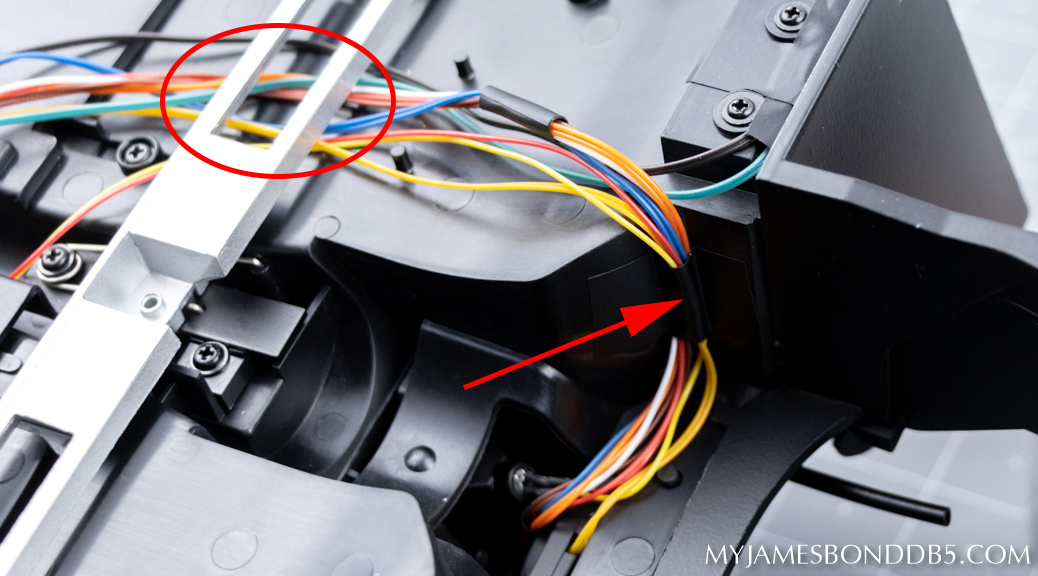 The wiring routes along the floor between these two sets of pegs  (circled below). I added a piece of electrical tape to hold it in place for now (arrow). This should keep the wiring out of the way so we can move on to installing the engine: 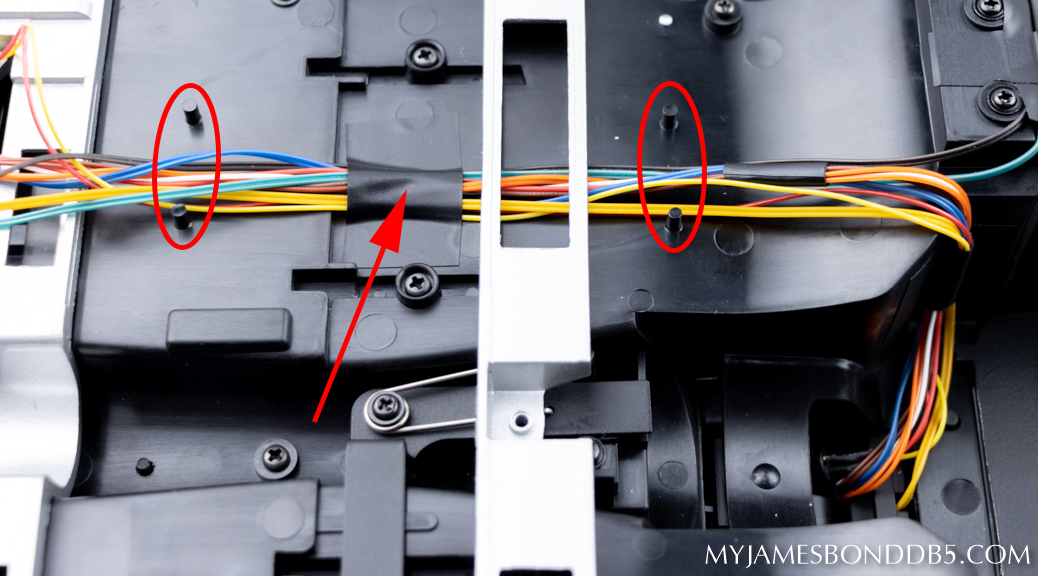 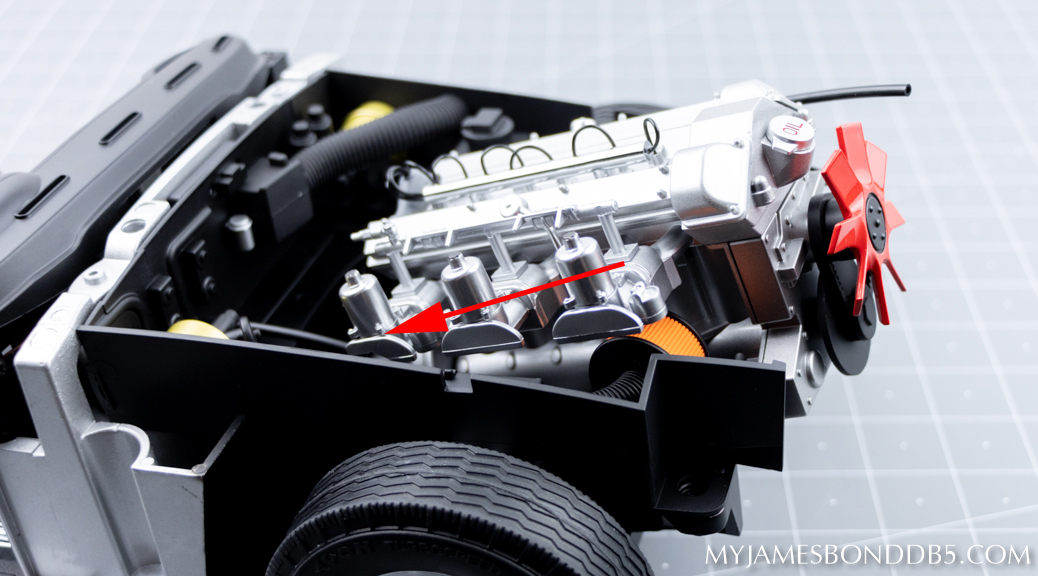 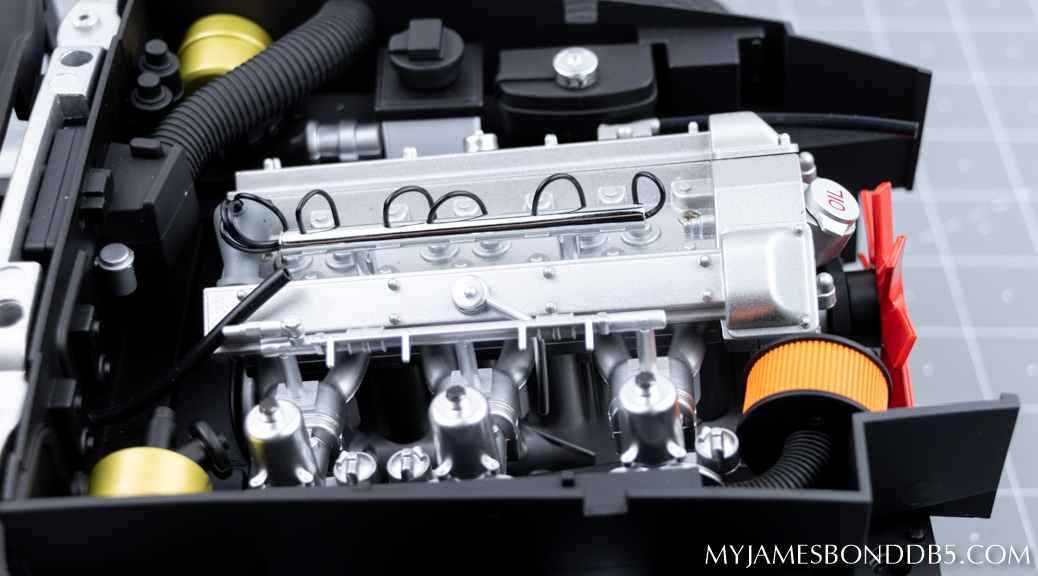 As you slide the Engine into place, be sure this hose from the rear Bulkhead is accessible from above: 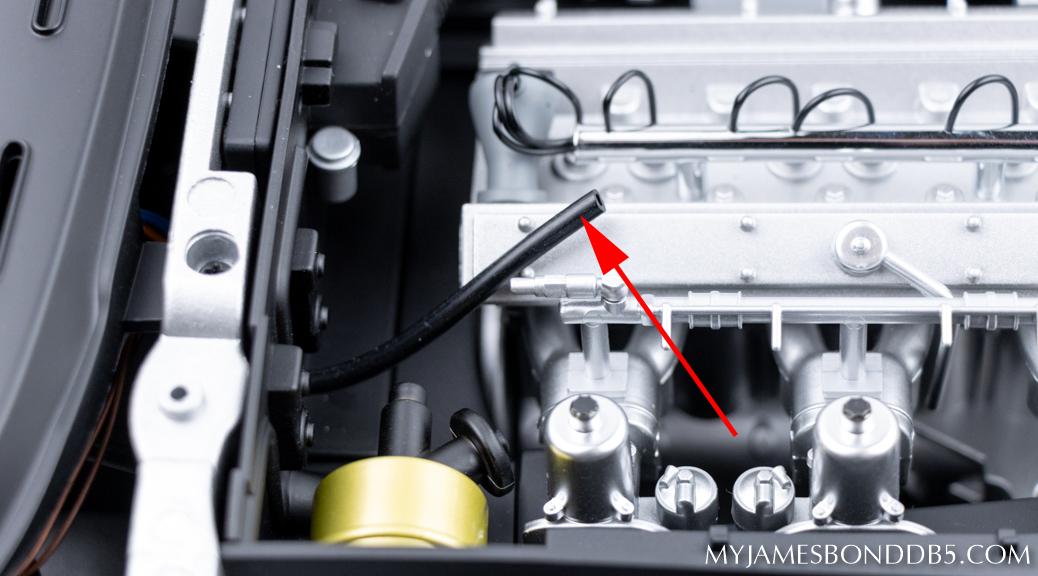 While holding the Engine assembly in place, secure the front engine mounting point from below with one (1) Type L black screw: 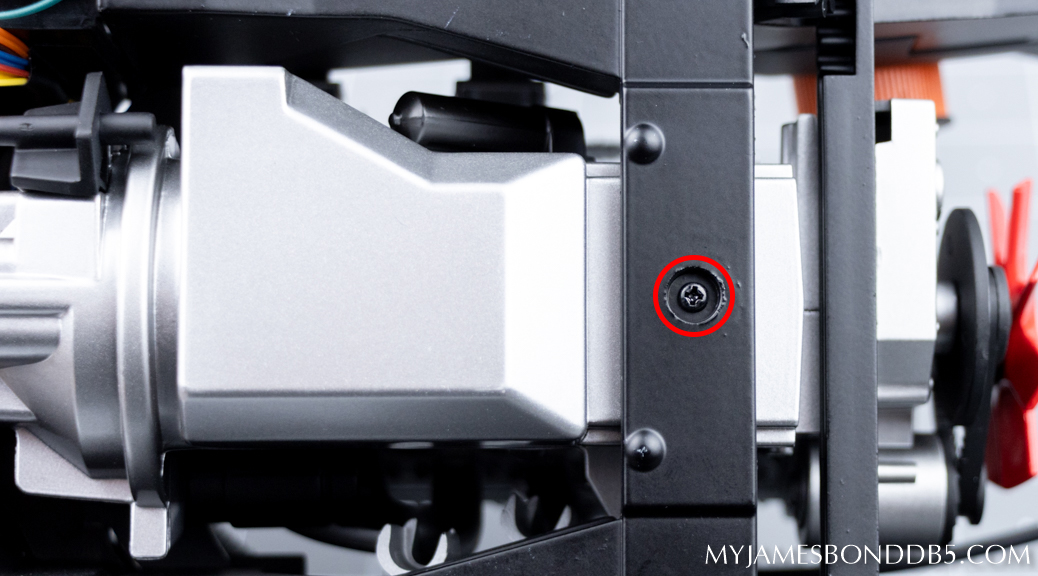 Secure the rear gearbox mounting point from below with one (1) Type C screw: 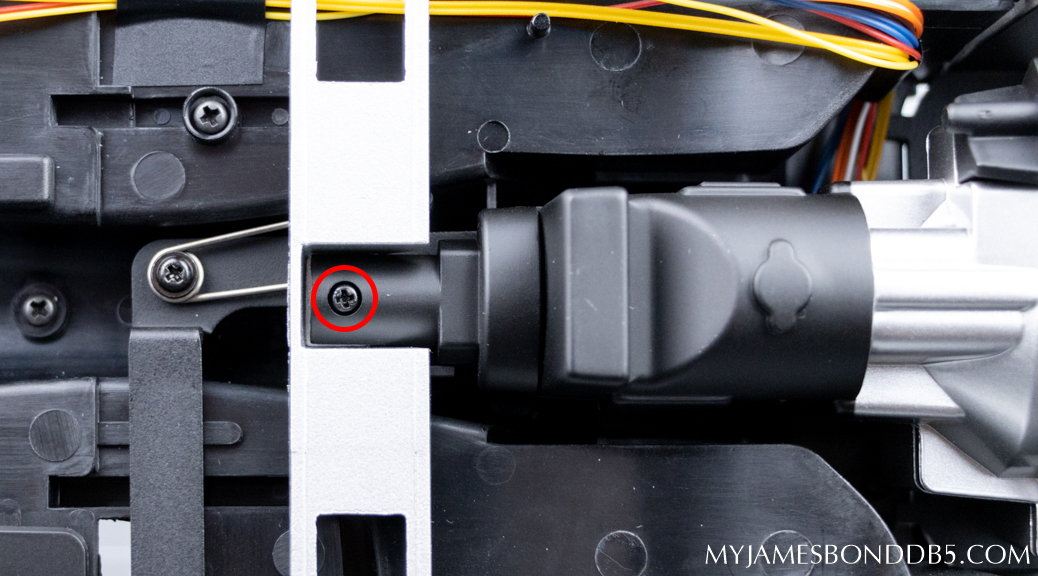 With the Engine assembly now secured, we can attach this Bulkhead hose to the Cross-Shaft Assembly, as shown.

I cut off about 1/4″ off the end of this hose to make it fit a little better: 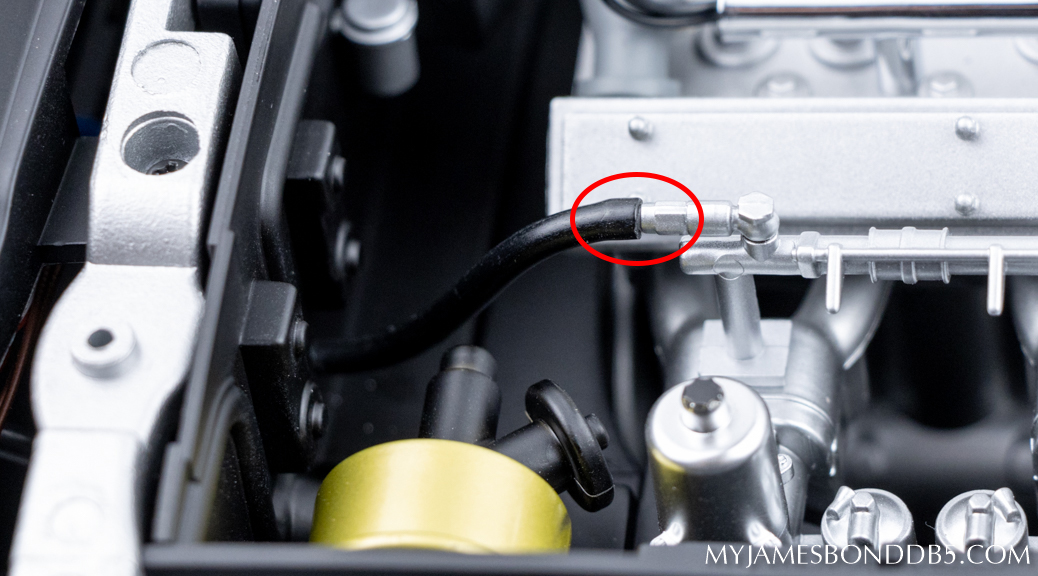 Secure the Main PBC to the rear Main Body Frame crossbar using two (2) Type V screws, with the wires away from the car and forward, as shown below.

Since there are more wires to secure in the next packs, I did not connect any of these wires yet: 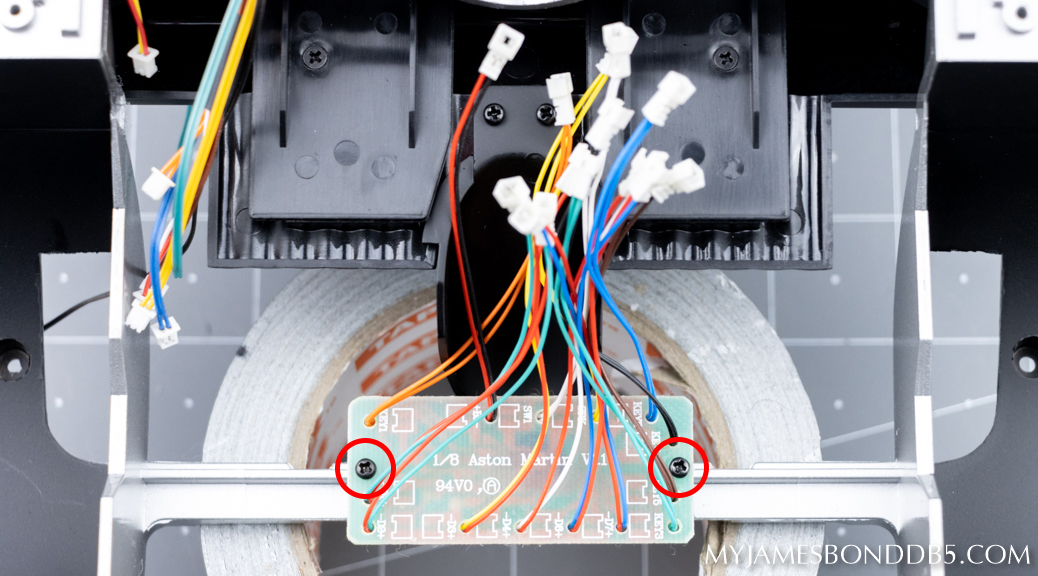 While we built some of the exhaust system, we do not install it until the next (final) issue. The rest of this pack was about installing the engine and bulkheads, and getting started on the wiring. We only have a little more to go, so keep all of these parts safe until then!